Skip to content
Home|Epileptic seizure: What should you do?

Epileptic seizure: What should you do? 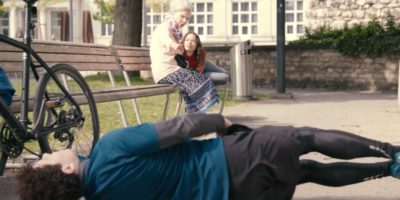 First aid during epileptic seizures is easier than most people think – this is what we learn from an enter­taining new short film. Produced by the Swiss League against Epilepsy in conjunc­tion with the Swiss Feder­a­tion of Samar­i­tans, the film is now avail­able online.

Call an ambulance – that’s how most people would react if they saw someone having a major epileptic seizure. Yet it’s definitely not what they should do first. The first thing to do is prevent the person having the seizure from being injured by quickly removing any dangerous objects and putting something soft under their head. It isn’t always neces­sary to call the paramedics – seizures are often over before they can get there.

In a Swiss German film which lasts just under three minutes and will make its audience smile, an elderly lady learns what to do. The young man experi­encing the seizure is played by singer, performer and former gymnast Lucas Fischer, who actually has epilepsy in real life. “Projects like this are really impor­tant to me,” he said during filming. “They help to break down barriers and stop epilepsy from being a taboo subject.”

With this film the Swiss League Against Epilepsy and the Swiss Feder­a­tion of Samar­i­tans are hoping to access and educate as many people in Switzer­land as possible. “We want to make people aware of a condi­tion which is mostly invis­ible – many people have no idea that around one person in a hundred is affected by epilepsy,” says Prof. Dr. Stephan Rüegg, Presi­dent of the Epilepsy League. “Someone witnessing an epileptic seizure doesn’t need to know much to be able to prevent serious injury.”