A team from Bern has won this year’s Research Recog­ni­tion Award which is presented by the Swiss League Against Epilepsy and comes with prize money of CHF 25,000. The award-winning project involves research into an innov­a­tive diagnosis method which uses magnetic resonance imaging (MRI). 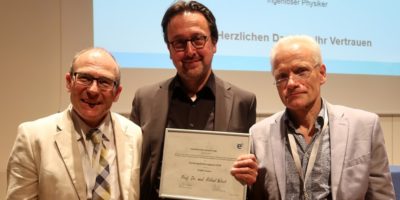 (Aarau) The Swiss League Against Epilepsy has presented its 2018 Research Recog­ni­tion Award to Prof. Roland Wiest, Dr. Claus Kiefer and Prof. Kaspar Schindler of the Univer­sity Hospital of Bern. The award was presented on 30 May 2018 during the annual meeting of the Swiss League Against Epilepsy, which this year was held jointly in Aarau with the Swiss Society of Clinical Neuro­phys­i­ology (SGKN). The lauda­tion was given by the Epilepsy League board member Dr. Klaus Meyer from Tschugg.

The award-winning project is entitled “Neuronal current imaging – the clinical appli­ca­tion of a non-invasive MR-based inves­ti­ga­tion method to detect local epilepsy-related magnetic field inhomo­geneities after a first epileptic seizure”. Prelim­i­nary work has already shown that magnetic field effects in persons affected by epilepsy can be measured during an MRI scan. There has been an obvious corre­la­tion between the effects measured and active epilepsy: after a successful opera­tion which stopped all seizure suscep­ti­bility, the field effects were no longer detectable.

Now the project team wants to system­at­i­cally use this method on patients who have had a first epileptic seizure and are due to have an MRI in any case, in order to test and improve it. The long-term objec­tive would be to develop a new method of detecting epileptic activity which could be used along­side the estab­lished electroen­cephalo­gram (EEG) method. The new MR technique can even detect magnetic field changes, which suggest epileptic activity, inside the skull – without the need for an opera­tion. This would be a huge advan­tage over the EEG method, which can only measure changes on the surface or which requires sensors to be implanted under anaes­thetic. Further appli­ca­tions are conceiv­able: “If the project is successful, its signif­i­cance could reach beyond epilepsy,” said Klaus Meyer in his laudation.